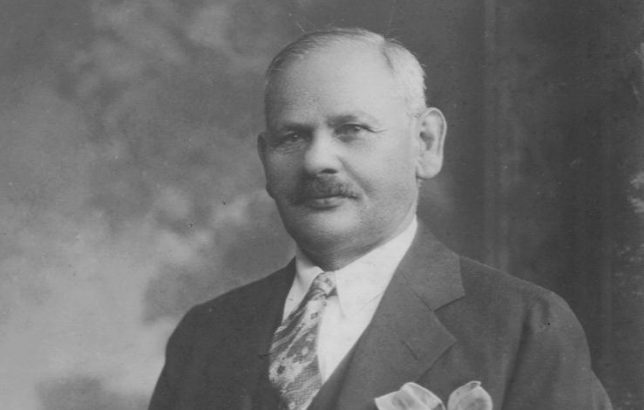 Boruch Chaim Cassel – called Bernard in America, but known to his friends as Alter – was born in Keidan in 1877, the son of a tailor. He had a traditional Jewish cheder education, but also studied Russian and other secular subjects. As a young man he was considered a maskil – an exponent of Jewish enlightenment. He may have attended a gymnasium (high school) in Riga, and served in the Russian army as secretary to an officer. By the late 1890s he was living in Riga, where official records list him as a bookkeeper and merchant.

Active in Jewish affairs, he collected Yiddish folksongs in 1898-99 around Keidan, and submitted (with a friend, Aaron Leib Pick) more than 140 of the lyrics published in the “Ginzburg-Marek” collection entitled “Evreiskii Pesnii v Rossii” (Jewish Folksong in Russia), published in St. Petersburg in 1901. He also served as secretary of a Zionist organization (possibly a Khovevei Tzion chapter) in Riga.

In 1904 he emigrated to the U.S., arriving in New York on the steamship Kaiser Wilhelm II. He started a succession of small enterprises, including a Bronx tobacco store, a printing shop, and an import-export firm called the “Russian-American Agency of Commerce” which did business until the early 20s. He participated in American Zionist activities, and also Jewish cultural ventures: In 1908 he served on the executive committee of the Society of Jewish Art.

He also attempted literary ventures, though without apparent success: From 1906 to 1908 he corresponded with the famed Yiddish writer Sholom Aleichem, about a plan to translate and publish some of the latter’s well-known stories, including “Motl the Cantor’s Son” and “The First Jewish Republic.”

Although he adopted the English name Bernard, his family knew him as Ben, and his Keidaner friends never called him anything but “Alter” – a Yiddish nickname (meaning “old one”) often given to children to protect them from the Angel of Death.

He married Anna Duberstein in 1916, and raised three sons. In the 1930s he served as editor of the monthly bulletin of the Keidaner Assn. of New York, his landsmanshaft. In that capacity he wrote a number of historical essays, sketches and memoirs about his native town. He died at his home in Sea Gate, Brooklyn, in June, 1941.