‘The Society of Jewish Art’

This is about a mystery. While searching through digitized newspapers from the early 1900s, I discovered B. Cassel’s name mentioned in an article, announcing the formation of this society at an event in one of  Manhattan’s most prestigious synagogues. 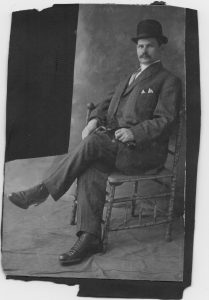 Less than four years after he had arrived in America, my grandfather was evidently serving on the executive committee of an organization whose founders included some of the most celebrated figures in American Jewry, including Judah Magnes, Cyrus Adler, C.L. Sulzberger Henrietta Szold and Louis Lipsky. (Google any of these and you’ll be as amazed as I was at the kind of company my grandpa was keeping.)

The key connection here was almost certainly Bernard G. Richards, B. Cassel’s landsman from Keidan, who had arrived in America a number of years earlier, and who was by 1908 already a well-known Jewish-American journalist, essayist and social activist. We know they were connected, if not from childhood, then through the Keidaner Assn. of New York, which through the 1930s often hosted Richard for talks, and who also may have been an intermediary between B. Cassel and the Yiddish writer Sholem Aleichem, during the latter’s first visit to America in 1906.

The mystery deepens, moreover, when you look at the description (below) of the society’s first meeting. The evening’s “short program” included a presentation of Jewish folk songs by “Mr. Kastel.” Could that have actually been Mr. B. Cassel, who a decade earlier had been collecting Jewish folk songs around Keidan, the lyrics of which were published in the first collection of its type, edited by Ginzburg and Marek in St. Petersburg, Russia, in 1901?

Unfortunately, this is almost the only evidence I could find that the Society of Jewish Art ever existed. Other than a couple of mentions in the New York Times and the American Hebrew Yearbook of 1908, there seems to be little record of it. So we are left to wonder, as with so many other aspects of his life, what B. Cassel was up to here, and what, if anything, his efforts produced.