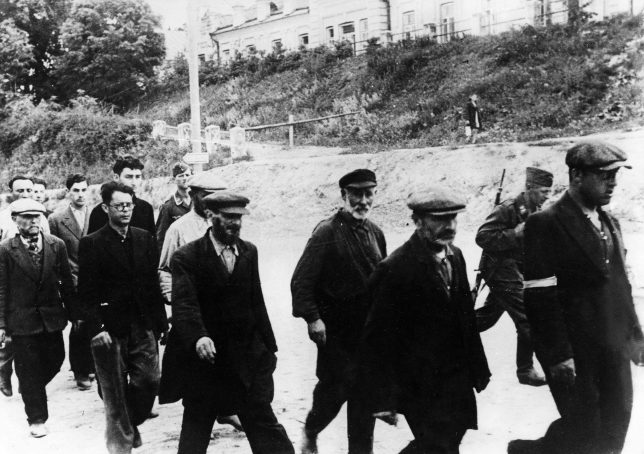 German and Lithuanian guards leading Keidan Jews away to be executed in 1941.

“The mass murder of the Jews of Keidan, together with Jews from nearby Shat [Šeta] and Zheim [Žeimiai] began on the afternoon of August 28, 1941. At the airfield, Soviet prisoners of war were forced to dig a huge mass grave one hundred meters in length, six meters wide, and two meters deep. The Jews were confined in a large warehouse 600 meters away. The guards divided them into groups of 20, and the first group of 20 men was led outside. Each group was driven to the pit by 30 armed murderers.

“To avoid frightening those still in the warehouse and setting off a panic, a tractor’s motor was left running by the warehouse. But the Jews heard the shouts and shots, and some decided to resist. Two of them, Chaim Ronder and a Polish Jew named Smolsky, hid in the warehouse and escaped after nightfall. They later became partisans and fought until the liberation.

“The first group included the young rabbi Aaron Galin, a son-in-law of Rabbi Shlomo Feinsilber, president of the Lithuanian Rabbinical Council. Beside the pit, Galin addressed the Jews with these words: ‘Severe suffering has been the lot of our people, [but] we will not be wiped out.’”

This was a day of remembrance and commemoration. In Tel Aviv, a few who still remember pre-war Keidan or are descended from the community gathered to recall the day it was exterminated. Meanwhile, in Kedainiai, some whose forebears may have also lived through those times laid flowers and wreaths at the site of the killings. On line, many Keidan descendents around the world have offered their own thoughts and memories about this tragic episode. For me, recalling the horror of that day is important — but so is acknowledging the powerful efforts and good will of modern day Jews and Lithuanians to confront this history, hoping to ensure that it is never repeated, and to give our own descendants a legacy transcending tribal hatred.