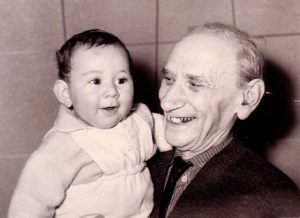 Hirsh Bloshtein, with grandchild, in 1965.

Among the pages I’ve added to the Keidan archives this week is this 1958 article from the Yiddish newspaper Morgen Freiheit by the Keidan-born poet and novelist Hirsh Bloshtein. Morgen Freiheit was a publication “affilitated with the Communist Party USA” according to Wikipedia, and Bloshtein himself was a dedicated Communist, who spent most of his life in the Soviet Union, living in what is now the Ukrainian city of Chernivtsi (but was once a leading center of Yiddish culture and literature called Czernowitz.)

Bloshtein is a fascinating and troubling character. According to this sketch, he became active as a poet and writer during World War I, and by the early 1920s was publishing in Yiddish newspapers in Canada and the U.S. as well as Poland, Lithuania and the Soviet Union. In 1925 he emigrated with his young family to Argentina, where he taught, wrote and engaged in leftist political activism. The latter caused his expulsion from the country in 1931; according to his great-nephew, Monty Starr, he left his wife and small children there and never reconnected with them. He returned to the Soviet Union, where he wrote and published in Yiddish during and after World War II.

That fact raises a difficult question: Since Stalin’s regime purged and executed most of the USSR’s major Yiddish writers during that period, why was Bloshtein spared?

One answer, according to a noted scholar of Soviet Yiddish culture, is that Bloshtein was apparently an informer for the the Soviet secret police. In an email this week, Prof. Gennady Estraikh of New York University told me:

“For many years, Bloshteyn appeared as an “extra” in my reconstruction of the Soviet Yiddish landscape … Recently, however, Bloshteyn emerged as a star in our (my and my Kiev colleague’s) research, based on materials from the Soviet secret police archives. It seems (judging by his numerous reports) that he acted for many years as an enthusiastic informer – certainly from the late 1930s until the early 1950s.”

It is, of course, disturbing to think of a notable Keidaner – or anyone – actively cooperating with the Soviet regime’s most repressive and brutal institution. And it certainly ought to color any reading of his prose or poetry, even when that writing seems to concern the kind of politically anodyne topics he deals with here, here and here. Yet I still think his material is worth including – as did the editors of the 1977 Yizkor book, as long as we keep in mind the context.

Bloshtein’s account of a return to Keidan in the 1950s, for instance, has to be read with the understanding that it is Soviet-approved, carefully vetted and designed to maintain the party line, which means downplaying the specifically Jewish character of the Holocaust and promoting a narrative in which “good Lithuanians” participated in the anti-fascist battle alongside all the other “great Soviet peoples.” While that all sounds almost ridiculous today, it was the state-enforced view for at least half a century, and it’s important to understand that as an important part of the story of Keidan and its diaspora.