From the 1977 Keidan Memorial Book, p. 217. Translated by Bella Golubchik.

If I shut my eyes I can conjure up in my memory a picture of our little town. The Smilga river we loved so much, meandering beneath the bridge, we loved it so dearly because it served as the gathering point for our branch of Hashomer Hatzair, the lively and energetic youth movement.

How far have I come from those days, when I made aliya, to now? More than 40 years have passed. Much has happened in this stormy time. The Jews of Keidan were wiped from the earth with unbelievable cruelty. All that remains is a hillock, a heap of bones – a mass grave at the edge of town, on the road to Dotnuva. 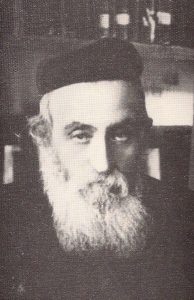 Here I would like to mention a few aspects of the personality of the rabbi of Keidan, Rabbi Shlomo Feinsilber of blessed memory. The day I remember most clearly is when I stood on the threshold of his home. I, a member of Hashomer Hatzair, noted nonbelievers, was going to bid farewell to the rabbi before making aliya to Israel. I knocked on the door and entered.

The room was large, modestly furnished. The rabbi sat in a corner next to a large table, reading a book. His noble face, adorned by a white beard, and his radiant personality enchanted me. I stood before him, dressed in the complete uniform of “Hashomer Hatzair” as if for a parade. I was a little confused by my own chutzpa. I said, ”Rabbi, I have come to say goodbye, before making aliya.” He looked at me and said, “I know that. I even know who you are.” (I thought it must most surely be my brother-in-law Prusak, his secretary, who told him.)

The rabbi rose from his seat, walked about a little, stood before me and said, “I certainly have a difference of opinion with your youth movement. However, the building of Eretz Israel is above all else.” Then he blessed me. When I reached the doorway I turned my head once more to look at his wonderful visage. The rabbi smiled and called out to me: “Build a beautiful land for us!” And I thought at the time: If only there could be many such rabbis in Israel.

A few years passed, and I heard that his young son Isaac had made aliya and become a member of Kibbutz Amir in the Upper Galilee. How I would have liked to meet with him and ask how his father had reacted to the path he had chosen; but to my sorrow and great pain our meeting took place on the shore of the Kinneret, when his lifeless body lay before me. Blessed be his memory!

As time passes I remember certain incidents connected with Rabbi Feinsilber, of blessed memory, one of which I would like to record. On Lithuania’s Independence Day, when even a government minister participated in the parade, the rabbi was called on to bring greetings from Keidan’s Jews. He opened his speech with a call to the Lithuanians to learn from the Jews, and to write in their prayer books: “If I forget thee, O Vilnius, may my right hand forget its skill!”[1] This made a mighty impression. The applause lasted a very long time. The next day a photograph of the rabbi appeared in all the newspapers, which also praised his wisdom and his devotion to the motherland of Lithuania.

Who could possibly have imagined that with the passage of a few years, those same people would behave towards the Jews as murderers and wild animals. Rabbi Feinsilber was among the first sacrificed. Great is the pain and the sorrow. Pity for those who have gone but are not forgotten.[2]

[1] A paraphrase of the often-said Hebrew prayer: “If I forget thee, O Jerusalem, let my right hand forget its skill.” (Psalms 137:5.)