A Golden Jubilee in Johannesburg

Published in the 50th anniversary booklet of the Keidan Sick Benefit and Benevolent Society.

Jewish emigration from Keidan to South Africa began as far back as before the Boer War, and at the turn of the century several immigrants from Keidan could already be found, both in Cape Town and in Johannesburg. Finding themselves in a strange country, they felt the need of getting together in order to share their memories of the old home as well as their experiences in the new country. 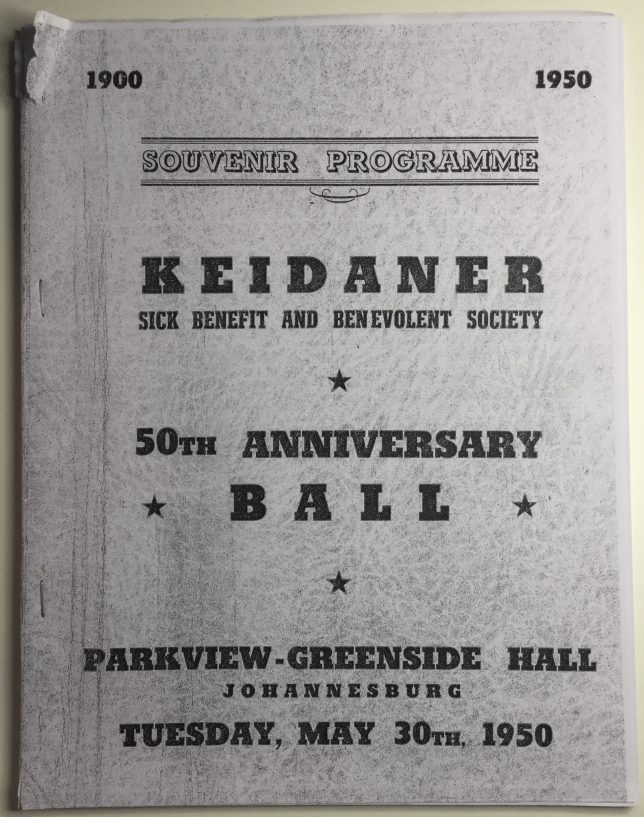 Cover of the 50th anniversary booklet.

The first immigrants from Keidan dreamt of forming a society of mutual aid of Keidan landsleit.1 In 1900 it was finally decided to form such a society in Johannesburg. Owing to conditions prevailing in Johannesburg at the time as a result of the Boer War, it was resolved to postpone the official establishment of the society until after the war. The society was officially inaugurated 1903, and was known as the Keidan Benevolent Society. The main object of the society in those days was mainly to render medical assistance to those members who required it. Membership was open to all born in Keidan or vicinity, to those whose wives had been born in Keidan or neighbourhood, as to all those who lived in Keidan for at least a year before their departure for South Africa. Members were expected to visit sick landsleit at the request of the Committee.

The first committee of the Keidan Society consisted of:

Unfortunately, today none of the members of the original Committee are alive, and when we celebrate the Golden Jubilee of our Society we must pay tribute to the memory of the first pioneers from Keidan who founded the Keidan Society, and thus established an organisation which not only assisted hundreds of landsleit to establish themselves in the new country, but also contributed greatly towards organised Jewish life in South Africa.

The following foundation members of the Keidan Society of 50 years ago are still among us today: H. Schlapobersky, L. Shilaner, N. Brener, B. Elk, Wolf (the eldest son of Itzik Yechiel), and we extend our heartiest congratulations to them on the occasion of our celebrations.

The first immigrants from Keidan, as most of the immigrants from Lithuania, reached South Africa without their families. They were cither single or married men who had left their families in the old home. They were lonely and homeless and clung to one another. They felt like brothers and shared their joys and sorrows. The Society helped them to strike roots in the new difficult surroundings, away from the homes where they had been brought up and from a Jewish life to which they were accustomed. The Society eased their feeling of loneliness and homelessness and created an atmosphere of the old home in the new surroundings.

Members of the Society met frequently in a closely knit circle. Every member showed deep concern for the welfare and wellbeing of the other landsleit.

On April 24, 1904, the Constitution of the Society was adopted, which defined the duties and privileges of members as well as of the Committee. At the time of its foundation the society numbered 40 members.

During the First World War, the Society assisted its landsleit in the old home, and when the Jews of Keidan returned to their home town from the various places to which they had been driven by the Czarist regime, the Keidan Society here in South Africa assisted them financially.

In 1916 the Society established a Gemilus Chasodim 2Loan Fund and the Society became known as the Keidan Helping Hand and Benevolent Society. With the foundation of the Loan Fund, the activities of the Society greatly expanded and a specific fund was created by means of special contributions received from members. An annual Purim Ball was held, the proceeds of which were devoted to the Loan Fund. It was with the aid of loans advanced by the Society that a number of Keidan landsleit succeeded in geeting established in business and trade. They were thus enabled to either assist their families in Keidan or bring them out to South Africa. The loans advanced were between £25-£30, and were granted to needy members without any difficulty or unpleasantness.

On June 2, 1916, the Committee confirmed the bylaws of the Loan Fund Society. The Committee consisted of Mr. Schlapobersky, Chairman, M. Rosenberg, Vice-Chairman, B. Elk, Treasurer, and the following members: M. Weitzer, I. Markunsky, A. Dangel and A. Licker. M. Linde was the Hon. Secretary.

For a certain period the Society had its own Minyan during the High Festivals and acquired its own Sefer Torah. The Minyan was held either at the Palmerston Hotel or in Balmoral Chambers. The income thus derived was devoted to the funds or the Society. Later their Sefer Torah was handed to the Braamfontein Synagogue.

After the First World War, a great number of immigrants began arriving in South Africa. Among them there were many from Keidan. The society grew both in membership and in the scope of its activities. The society assisted a number of the newly arrived immigrants financially and helped them to establish themselves. Thanks to the Helping Hand Society, a great number of the immigrants established businesses or obtained employment, and it is gratifying to note that many of them were most successful in their undertakings. The new arrivals took an active part in the work of the Society which increased its contributions to the old home. In those days of Jewish autonomy in Lithuania, a number of Jewish national and communal institutions were established in Keidan, and the Keidan Society of Johannesburg assisted them financially.

The members of the society took an active part in the “War Victims Fund” which conducted a drive for funds for Jewish war victims in Eastern Europe. The leaders of the Society took a prominent part in the conduct of the campaign.

With the introduction of the Quota Laws in South Africa in 1930, emigration from Lithuania into South Africa was brought to a standstill, and almost no new immigrants arrived. The Society, however, continued with its activities of helping landsleit in South Africa and assisting Jewish institutions in Keidan.

The position of the Jews in Lithuania deteriorated gradually, particularly in the economic field, and more and more of our friends in the old home had to fall back on help from South Africa.

The terrible tragedy which befell European Jewry during the Second World War did not pass by our old and beloved Jewish community of Keidan, which was destroyed together with the rest of Lithuanian Jewry. Only a few landsleit survived the Nazi blood bath. In 1944, the Keidan Society inaugurated the “Keidan and District Relief Fund,” which immediately upon its inception commenced to render assistance to surviving landsleit who were either scattered all over Russia, or languished in the camps of Germany and Italy. The Society endeavoured to obtain the names and addresses of all surviving landsleit in order to be in a position to help them. Some 120 such names were received and the Society began to dispatch regular monthly parcels of food and clothing to them. The majority of these landsleit are at present in Israel, and the Society keeps in touch with them. The Society, for instance, helped a young man from Keidan who was suffering from tuberculosis to undergo a course of treatment in Switzerland, and maintained him throughout his treatment. It is gratifying to learn that this young man is at present in Israel, where he qualified as an electrician.

The Relief Fund was registered in 1944 with the Welfare Board as a welfare society, which enabled us to embark upon fundraising ventures in a more efficient and organised manner. Our Society was the first and only one of all landsmanshaften to be thus registered. This enhanced our prestige in the Jewish community.

A most important achievement of our Society, which is also unique among such societies, was the formation of a company known as Keidan Settlement, Ltd. This company has been registered with an appreciable capital for the purpose of building homes in Israel for Keidan refugees. Our late lamented landsman, Samuel Stein, subscribed an amount of £5,000 for the objects of the company. Representatives of the Society, among them the late Mr. Samuel Stein, and the Committee members, Messrs. S. Keidan and I. Wolpe, visited Israel and negotiated with the directors of the J.N.F. [Jewish National Fund] the setting aside of a suitable piece of ground near Tel Aviv for the building of homes for refugees from Keidan. We hope that it will not be long before we are in a position to commence building operations, and thus our Society will not only play its part in a work of help, and rehabilitation for our landsleit in Israel, which will be a source of pride to us, but will also make its contribution in the upbuilding of Israel. The Keidan Society undertook to bear the expenditure involved in the building of a reading hall and library in Kibbutz Beit Zera, where a number of families hailing from Keidan are concentrated. This hall will serve as a memorial to Keidan and will house documents, books and pictures dealing with Jewish Keidan. On the anniversaries of the destruction of Keidan: Jewry, all Keidan landsleit in Israel will assemble in this hall in order to commemorate their brethren — the martyrs of Keidan. This structure will be a fitting, though modest, way of perpetuating the memory of the important spiritual Jewish centre of Keidan, which no longer exists.

Members of the Keidan Society participated in the activities of all Jewish organisations in Johannesburg. The Society has been affiliated to the S.A. Jewish Board of Deputies since the Board’s inception, and Mr. H. Schlapobersky has represented the Society on the Board throughout all these years. Our members have participated in all campaigns and drives held in Johannesburg for local and national causes and institutions.

The Women’s Society took an active part in the Relief Campaigns, and organised a number of functions in order to raise funds for needy landsleit in the old home. The Women greatly assisted in the annual Passover Relief Drives. The Women’s Society helped a great deal in drives for funds for the Keidan survivors of Nazi brutality. They sent a number of parcels frequently and regularly to their unfortunate brethren, wherever they were.

On the occasion of the celebration of the fiftieth anniversary of our Society, we must not forget that this joyous event is mixed with sadness. We celebrate the fiftieth anniversary of our Society at a time when Jewish Keidan, which boasted of a Jewish past of five hundred years, is no longer there, but was brutally wiped out by forces of darkness. We cannot forget Jewish Keidan, which was a centre of Torah and culture in Jewish Lithuania. We have received numerous messages of congratulation from various bodies on the occasion of our celebration, but there was no message from Jewish Keidan, which is, alas no more in existence.

During our festivities, we must remember our martyrs, who together with millions of other Jews, were so cruelly and brutally murdered by the Nazis. We must remember that we can perpetuate their memories in a corner of Israel, as we intend doing, and we must endeavour and remain true to the traditions of the Jews of Keidan, who cherished and revered Jewish values and our spiritual heritage.

Let the glorious memory of the Jewish community of Keidan, with its rich and wonderful past, shine upon our festivities, and may it lead us towards further fruitful and devoted activity for the welfare of our people.