We were recently contacted by Israeli filmmaker Boris Maftsir, best known for his documentaries about the Holocaust. Maftsir’s film project called  “Searching for the Unknown Holocaust” includes documentaries on the experience in Latvia, Belarus, Ukraine, Russia, and Moldova. Maftsir aims to further explore the Holocaust in Lithuania, particularly in its smaller towns and shtetlech, possibly including Keidan. He has already received partial funding, but needs additional help to cover the cost of travel, research and preparation of the scenario.

Maftsir maintains that while the Holocaust in Central and Western Europe has been well researched and explained in numerous books and films, the experience within the former Soviet Union was for many years suppressed by that country’s government. His project, which brings some balance to public understanding of the Holocaust, is especially important now because it’s still possible to meet and interview those eyewitnesses who remain.

In our recent discussion, Maftsir was impressed with the amount of material we have collected about Keidan, and indicated he may include it among the Lithuanian towns described in this movie. For this reason, we think Keidaners may want to help him with donations of whatever size, which may be sent via the Israeli bank shown here:

Posted in History, Holocaust, Soviet Union | Comments Off on Documenting the Holocaust

The following was submitted by Aryeh Leonard Shcherbakov.

There are many reasons why the name of Aharon Pick has long attracted our attention: He was born in Keidan, he was a self-made “man of letters;” he had an impressive professional career as a doctor in Šiauliai; he was active in the Šiauliai Jewish community, and in the last, tragic stage of his life, confined to the Šiauliai ghetto, he wrote a journal — one of the most important testimonies of the Holocaust in Lithuania. END_OF_DOCUMENT_TOKEN_TO_BE_REPLACED

Assisted by other doctors and nurses in the makeshift hospital of the Šiauliai ghetto, he euthanized them with heroin and morphine, in one instance resorting to drowning a baby girl when the toxic injections failed to do their job quickly enough. The Germans had formally prohibited all Jewish births in the ghetto, and had the newborns been discovered, their mothers and all other family members would be killed as punishment.   END_OF_DOCUMENT_TOKEN_TO_BE_REPLACED

Dear Andrew,
Congratulations on this fascinating project! I just came across this blog today and am finding a lot of interesting information here. END_OF_DOCUMENT_TOKEN_TO_BE_REPLACED

Recalling those who survived the Keidan massacre

When talking of the Jews of Keidan, the first who naturally come to mind are those who were murdered: our grandparents, uncles, aunts and cousins lying in the mass grave on the outskirts of town. Some of their names are engraved on the memorial plaques installed by the mass grave.

Not all however; only those names that Rimantas Žirgulis, director of the Kėdainiai Regional Museum, with the help of some Keidan descendants, was able to collect. They were found mainly on testimony pages held at the Yad Vashem Memorial Museum in Jerusalem. More than half of the victims were not memorialized; no memory of them remained, as entire families were erased with no one able to testify to their existence in pre-war Kėdainiai. END_OF_DOCUMENT_TOKEN_TO_BE_REPLACED

Each summer, one of Lithuania’s most popular TV shows, called “Labas Rytas Lietuva” [“Good Morning Lithuania”] highlights different towns across that country. This year its focus was on Kėdainiai, and on July 4, the show aired a walking tour through the town’s Jewish quarter. Audronė Pečiulyte, director of the Kėdainiai Multicultural Center, gave the interview. Kėdainiai teacher Laima Ardavičienė shared the video on Facebook, and, very graciously, agreed to transcribe and translate the interview into English. END_OF_DOCUMENT_TOKEN_TO_BE_REPLACED

Much of the material on this website got here via a project initiated several years ago by David Solly Sandler, a native of Johannesburg and Litvak descendent, who has compiled an impressive print library of material on Lithuanian Jews, there and in the diaspora. I had worked on and off for many years to try and make the Keidan Yizkor Book available in English, but the project only really took off after David offered to finance and publish a full translation.

END_OF_DOCUMENT_TOKEN_TO_BE_REPLACED

Another Day to Remember

Recently, Jews around the world commemorated Yom HaShoah. Yet even if the Holocaust had never happened, however, this would be a season for remembering the suffering, death and displacement inflicted on the Jews of Eastern Europe by war – World War I.

END_OF_DOCUMENT_TOKEN_TO_BE_REPLACED

After reading my post about Hirsh Bloshtein, and the memoir “A Return to My Birthplace, Keidan,” posted here, Aryeh Shcherbakov submitted the following commentary, which I have edited. Shcherbakov, of Tel Aviv, was born and raised in Vilnius, Lithuania. The family of his mother, Guta Kagan, was among those murdered in Keidan on Aug. 28, 1941. He serves as secretary of the Association of Keidaners in Israel. 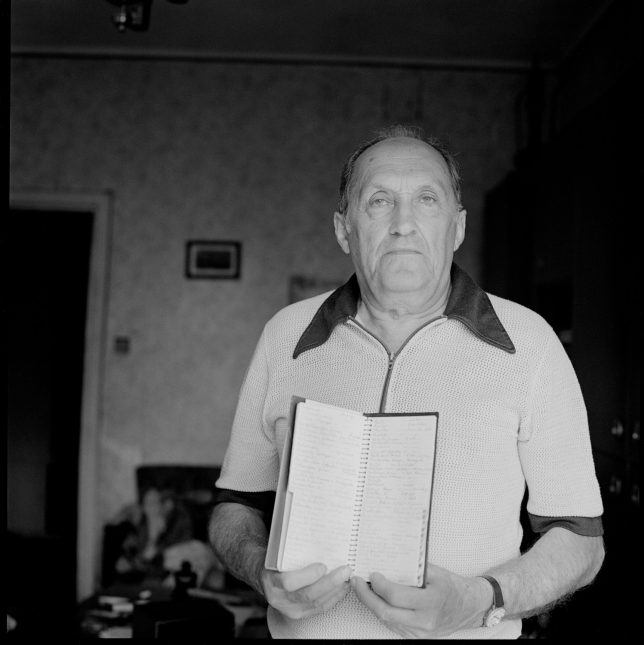 Yudel Ronder in 1995, with his “black book” containing notes about Lithuanians he identified as murderers of Jews. Photo by Laurence Salzmann

I first heard of him in 1994, from Laurence Salzmann, a Philadelphia photojournalist who was documenting Jewish survivors of the Holocaust in Lithuania. At the time all I knew about Keidan came from my grandfather’s articles, which predated World War II. I was eager to learn more, and so I sent a letter off to the address I had been given. Not long after, the following arrived, handwritten in Yiddish: END_OF_DOCUMENT_TOKEN_TO_BE_REPLACED