In the 1890’s, the gathering place for Keidaners was at the corner of Bayard and Forsythe Streets [in New York]. Later they gathered on Market Street. In both of these places one could hear news from the old hometown of Keidan. There was then a short-lived association of Keidaners, which had a very long name.

In those years immigrants were still arriving from Keidan, but no one thought of organizing a real association.

My teacher and friend, Mr. Moshe Shmere Lichtman, carried around the idea of founding a Keidaner verein [association], but the real credit must go to the friend of my youth, Meyer Zalman Kaplan.

The Keidaner Association was founded on a Saturday night, September 8, 1900, at the home of Abba Weitzter, at 152 East Broadway, New York City.

Each of the young men there paid 25 cents, creating a total capital of $3.25. There were 13 young men at that meeting. The task of renting a hall and sending out postcards for the next meeting was assigned to Meyer Zalman Kaplan, who carried out these duties in a most efficient manner. At the next meeting, in a hall on Eldridge Street, 90 people attended, all of whom became members of the organization.

The strength, loyalty and devotion of these members to the association was assured at that meeting on September 16, 1900. At that meeting it was resolved that only people from Keidan could be members. That decision was crucial in the development of our beloved Keidaner Association. 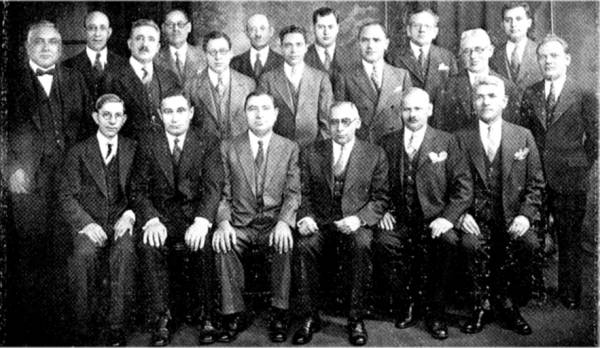 Whether we had intended to or not, now at our 30th anniversary we are inclined to draw parallels between our life in Keidan and our life in America. It is true that from a material standpoint life there was not as easy as it is here. But still, no matter how severe the economic pressures, there we felt a kind of freedom of the spirit. A family head, surrounded by his children and grandchildren felt proud of his origins, of his home, He lived like a biblical patriarch, and he sensed that the essence of one’s existence was life itself.

The Keidaner lived a life which was quiet but not boring. There were no theaters, dance halls or other places of amusement. Instead he had a home and a synagogue. When earning a living became less of a burden, he could spend more time in the synagogue, which also served him as a kind of club. Time was too precious for him to worry about how to pass it. He would quote the dictum that “time is short and the work before us is plentiful.” And in this way each generation stamped its mark on each succeeding generation, until our own new age came – the generation that sought practical accomplishments.

Keidan became too restricted for us, and we began to look for new homes. We became a generation of wanderers. We were gathered up in America, Africa, England and turned into new breeds of Keidaners. Now our lives are intense, full of diverse interests and problems, and we are proud of our successes in our new homelands. We “make a living” in America, but at costly price – we gave up “living” in exchange for “making a living.”

Our homes are now far more comfortable and beautiful than in the old days in Keidan. Our furniture is more luxurious; we have steam heat, beautiful bathrooms, pianos and drapes. But what good is this if no one is ever home? We seek every opportunity to be away from home. We run to theaters, movies, cabarets, opera, and only return home to sleep. It seems doubtful that we have improved on our lot, if ever we think of our old, spiritually-rich, book-laden homes in Keidan.

We now live at a rapid tempo, and we have no time to live. We are prisoners of our businesses, our nerve endings are raw: “Time is money!” And at the same time we are constantly looking for ways to amuse ourselves. Any bit of free time we fall into becomes a heavy burden. Whole families – men, women, sons and daughters – spend entire nights at the card table. We’ve come to believe that in some devilish way this card playing calms our nerves. The “evil inclinations” of the old days are insufficient for us now, and we have supplanted them with card playing and gambling. Worst of all is that we have abandoned our respect for our ancestral heritage, and we have convinced ourselves that we have achieved some higher level of spirituality. We moderns are now assuming a stance against our old-fashioned parents. We lose sight of the dangerous consequence that when we oppose our parents, our children lose their respect for us as well. In their eyes, our children are now the modern generation, and we are the “greenhorns.”

This 30th anniversary of our beloved organization should serve as a turning point – it is time to take stock of ourselves. We must make a united effort to gather our spiritual treasures, crystallize them, and transplant them on American soil. We must renew ourselves, and show our children that our cultural treasures are not worthless. We should be examples of justice and charity for our children. Our Charity Fund, our Loan Relief Fund and our Passover Fund should become the pride of our members and their children. We should actively organize such funds for our brothers who are still in our old home city of Keidan. We must be more concerned with our parents who still remain there, if we want to keep the respect of our children here.

Our organization is proud of the funds which were created to ease the need of our brethren here and in Keidan. During the years of its existence, the Loan Relief Fund helped those of us who needed money, by providing funds that could be repaid in small installments, without interest and without “red tape.” This was all carried out in an honorable way, and we all recognize its activity as one of our fundamentals.

The second is the Charity Fund. Many of us have been helped very discreetly. Everyone who turns to this fund is helped secretly, without embarrassment. No one truly in need has ever been refused. The directors of the Loan Relief Fund are also active in the Charity Fund, and they fulfill their duties with the highest devotion.

Our third fund was created mainly for our poor kin in Keidan. We are lucky to be well off here in America, and we dare not forget our less fortunate brothers in Keidan. There is no finer deed that our organization could have done than to set up the Passover Fund. It would be appropriate if, on the occasion of our present celebration, we laid the foundation for another important fund:  A loan fund to benefit our poor home city of Keidan.