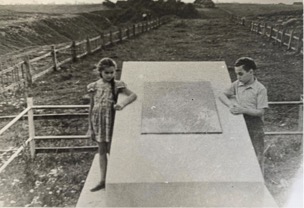 1956 or 1957. Left, Lea Ronder; right, Yosef (Osik) Ginzburg, son of Liova Ginzburg. After coming to Israel in 1957, he changed his name to Yossi Ginossar and became one of the prominent figures in the Israel Secret Service (Shin Beth). He was instrumental in peace talks with the Palestinians that led to the 1993 Oslo agreements. He passed away in 2004, age 58. The tragic fate of Liova Ginzburg’s family didn’t end with the Holocaust, which took away his whole family. His grandchild Shachar, the eldest son of Yossi Ginossar was killed in 1991 in Gaza. Accidentally, this tragic incident occurred while the author of these lines was on the active reservist duty in Gaza, just a few hundred meters away from the place. A military doctor of our unit was the first to approach a deadly wounded boy, and I was totally shocked to learn that this was Yossi’s son.

Bookmark the permalink.
Scroll Up