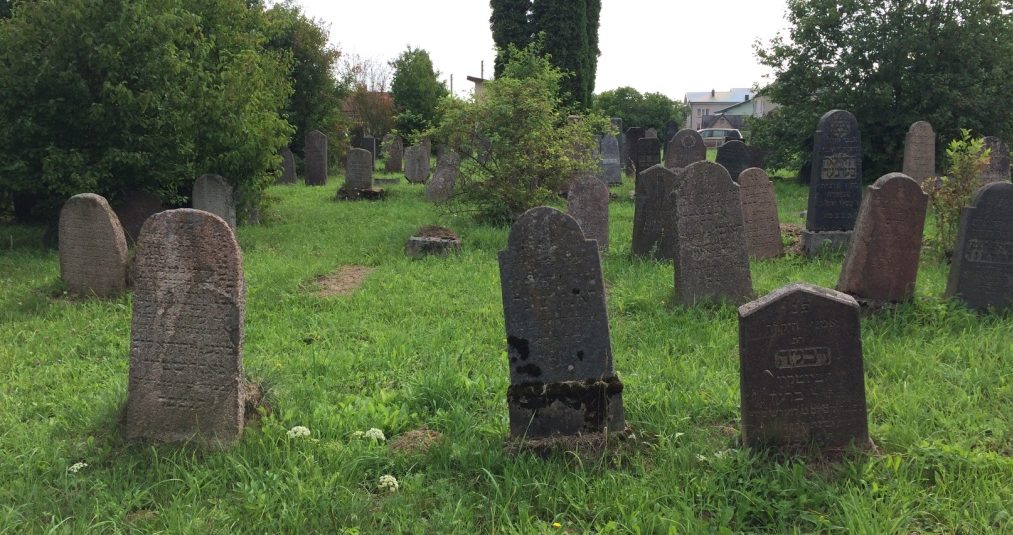 In 2016, I was invited to a seminar held in Vilna. At the end of the seminar, I took a train to Keidan, the hometown of my father and his mother, to visit the graves of their ancestors buried in the town’s Jewish cemetery. It is one of the largest Jewish cemeteries in Lithuania that survived the Holocaust and the Soviet regime. I was very sorry to find the place neglected, and the tombs of my ancestors not at their best. (My previous visit there was 10 years earlier.) I decided to return the following summer with cleaning tools, to clean the ancestral graves. Indeed, a year later I came back, equipped with a full bag of cleaning material, and toiled for several hours to clean the graves. I was only sorry that I could not do the same for the other graves in the cemetery, which number about 580.

After finishing my work, I met with Laima Ardaviciene, an English teacher at the local Kedainiai Atzalynas Gymnasium. In recent years, Laima has done much to preserve the memory of the Jewish community in Keidan. She offered to show me her students’ latest annual project. As I entered her classroom, I was amazed. On one wall was a huge painting of a tree, its roots protruding from an image of the bet midrash (study house) that survived in Keidan, and its branches extending towards the ceiling. I approached the painting. The branches listed the names of Jewish families who lived in the town before the Holocaust. Excited and amazed, I stood in front of this huge piece of art.

Laima said she was about to initiate a new project for the coming school year, also to commemorate the Jewish community. I showed her photographs of the cleaned-up gravestones of my ancestors, and I dared to suggest that, for her project, she undertake cleaning of all the gravestones of the cemetery. After considering my idea for a while, she decided to accept it.

The cleaning project began in the spring of 2018, with the participation of students and even teachers from the gymnasium. After two seasons of work, cleaning all the cemetery’s matzevot (tombstones), Laima and her students photographed their inscriptions. The photos were sent to me, so that I could decipher them, and so that Laima could place them on the special website she set up for the project.

The readability of some of the tombstones is not the only remaining problem. The cemetery has some fifteen fallen gravestones and about the same number of inclined ones. Our intention was to enlist the help of the municipality to repair these problematic tombstones. It turned out that this requires the approval of the chairman of the Jewish community in Vilnius. Sadly, no such approval has been received, three years after we applied for it.

From the inscriptions on the tombstones, it can be determined that Jewish burials began in this cemetery before the 1880s. The earliest tombstone identified is from late 1879 (numbered H39). Most of the existing stones from the 1880s are in row H of the cemetery, although some graves from those years are in other rows as well. Local Jews continued to be buried in this cemetery through the 1930s. The stone numbered C1 carries a date from early 1940.

One question to be asked is, were Jews buried in this cemetery during World Wars I and II?

During World War I, the Jews of Keidan, like all Jews throughout Kovno province, were expelled from their homes; tsarist officials ordered them to leave on the eve of Shavuot 1915, forcing them to migrate to the Ukrainian provinces or elsewhere in imperial Russia. The deported Jews were allowed to return to their homes only after the post-revolution Soviet government signed a repatriation agreement with newly independent Lithuania in 1920. Nevertheless, the Keidan cemetery contains tombstones of Jews who died during the expulsion years, 1915–1919. One possible explanation for this is that some Jews were unable to travel far away to Russia and Ukraine; after the German army occupied Kovno and Vilna provinces in the summer of 1915, a number of these Jews returned to their homes. Materially, these were very difficult years, and many of those who returned to Keidan died.

Twenty-six years later, in August 1941, almost all the Jews of Keidan were murdered, their bodies left in a pit outside the town, and after the war Jews no longer lived there. Yet an unusual double grave from 1945 (numbered B2) has been identified in the cemetery. According to the inscription on this tombstone, it was a married couple who were murdered after the war and buried here,  the last to be interred in Keidan’s Jewish cemetery.

Many of the inscriptions on the tombstones employ similar wording, in which grief is expressed over the death of the family member, followed by his or her name, the father’s name, sometimes the family name, and the date of death. But there are also more elaborate and lyrical inscriptions. An example is the tombstone of my great-great-grandfather, Chayim Eides, who came to Keidan with his two young children from Ukmerge (Vilkomir) in the mid-19th century. He died in 1892. The inscription (location I19) is an acrostic, with the initials of the Hebrew sentences spelling out his Hebrew name, Chayim b”r Mordechai:

Chayim Eides died at age 72. However, there were also scholars who died at a much younger age. Stone number J18 marks the grave of Ben-Tsiyon, son of Shlomo, “The prodigy from Krozh.” Here again, the initials of the sentences in Hebrew construct the deceased’s name (numbered J18):

Even these, however, are relatively standard in comparison with the moving one on the tomb of Hillel, son of Avraham Troib, who died in 1908 at age 13. (Location E40). This inscription was written by his mother, who lost her single son.